Yessiree! It’s time to jump into the water again!

After a long winter with lots of ice, and a well deserved trip to warmer water, it was time for yours truly to submerge oneself into the cool waters of the Baltic Sea.

Field season 2013 opened on Wednesday 22 May at the scenic island of Gotland, jewel of the Baltic Sea.

For the faithful reader, it comes as no surprise that it was time for the inventory of summer reproducing bladderwrack around this beautiful island, as part of the investigation we made along the mainland coast and Gotland last year (see previous post on Tångbloggen 2012 – A seaweed odyssey).

Gotland is well known by many botanists for its amazing flora, and the orchids certainly fought for space with primroses and lily of the valley along the road as we drove north from Visby up towards our first stop just south of Lickershamn. 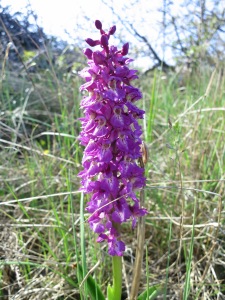 Unfortunately, I think most people fail to see how beautiful Gotland is below the surface. The clear water and the dense seaweed forests are magically beautiful and are conveniently found at knee-depth in the water. If you do not like to get wet, you can easily experience life below the surface with a pair of high rubber boots or waders and water binoculars.

Our second stop was out on the island Fårö, at Lauter huvud. At the moment it’s a rather low water level in the Baltic Sea. It is caused by the weather and is not unusual this time of year. But it gets a little tricky to swim when you are constantly running aground. It was easier to walk among the rauks and occasionally stick my head under the surface in order to verify single specimens of Fucus. Quite possibly the occasional tourist who stayed at the car park was wondering what we were doing. One is not exactly discreet in a bright red dry suit. Hope I did not destroy too many photographs by emerging between rauks like a jack-in-the-box.

Having swum a little off the cliff edge, where it goes from 0.5 meters deep to 15 meters, we went to today’s third and last site at Östergarn.

Here the waves rolled in with a quiet rhythm, and if I had not been busy counting, I would certainly have fallen asleep, it was so very peaceful. The sun had come out and warmed my back as I floated about. I saw plaice, viviparous eelpout (Zooarces viviparus), stickleback, and Lesser pipefish (Syngnathus rostellatus). 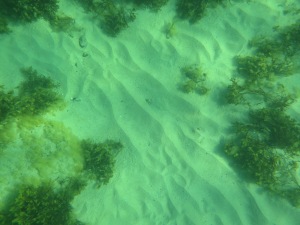 The plaice is resting among the seaweed.

The night was spent at the nice hostel in Hemsedal, which had very comfortable beds.

Thursday morning began with a trip down to the southernmost tip of Gotland, the Hoburg. Here we encountered more nature lovers in the form of a flock of birdwatchers. The species often nests at the southern tips of both Oland and Gotland and is easily recognized by the telescope that is often worn over the shoulder.

I even saw Red-Backed Shrike (Lanius collurio), Northern Wheatear (Oenanthe oenanthe) and a yellow bird that I didn’t recognize.

The sea was calm and the swans that landed some distance away did not attack the red ball splashing around, muttering through a tube (snorkel). It was nice to see that htere were many small juvenile seaweed individuals there. Reproduction last year was apparently very successful. Always a good sign.

Our last stop for a dip was just south of Klintehamn. On the way there we visited the nice naturum center in Vamlingbo for a short break. With coffee in the body, we parked at what must be Gotland’s busiest road, and changed into work clothes.

“When you take off your pants, five cars and a bus will always appear” – Old jungle proverb

It was the only site with lots of bladders on the wrack! One might think that bladderwrack always have bladders, but no! If the site is exposed to strong wave action, no bladders are formed. This is to minimize wave grip, so that the wrack does not get torn off by the waves. 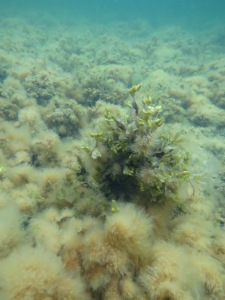 Bladders on the bladderwrack – not always to be expected.

It was plenty of gammarids, prawns and isopods here, and I hope I got a picture of the Lesser Pipefish hiding amongst the seaweed. It was obvious that there is a lot of nutrients coming out into the water as runnof from land. The seaweed had much filamentous algae growing on them. Swimming across it reminded me of a shaggy rug.

After again having fulfilled the jungle proverb (Why?!?) we headed towards Visby and enrolled into the prison. If we get out tomorrow remains to be seen.