Fish in the hand of humans – a Baltic Seminar. At the Baltic seminar last week two interesting presentations were given, one about the linkage between benthic vegetation cover and fish recruitment and production and the other one the strong impact by large fishing companies.First, Johan Eklöf, Department of Ecology, Environment and Plant Sciences, Stockholm University, presented the impact of cascading effects and the close interaction between rooted aquatic plants and seaweeds and fish recruitment of for instance pike and perch in shallow Baltic Sea bays. Shown both in more and more scientific studies and experiments.

In the first figure the positive effect of large fish is shown on the filamentous algae and how rooted aquatic plants benefit the recruitment of fish .e.g perch in shallow parts of the archipelago.

Fig. 2 shows that there seems to be a threshold of 20 % cover that is optimal for recruitment.This was followed by a presentation by Henrik Österblom, from Stockholm resilience centre about the large impact of big companies managing the fish stocks, both, on a global scale and in the Baltic Sea.

The seminar ended with a panel discussion addressing the question if the fish stocks are in the hand of humans and if we will be able to find ways of sustainable use of and management of fish stocks.

Can the knowledge of the strong link between vegetation and fish recruitment be transferred to better management of shallow bays and coastal areas? Sofia Wikström and Gustaf Almqvist at the Baltic Sea centre, Stockholm University added to the discussion about the need of further improving our understanding of these complex ecosystems for a long-term sustainable management of fish species like pike and perch.

To celebrate the 70th birthday of His Majesty King Carl XVI Gustaf, a unique show “An evening about the Baltic Sea- Hopes and threats” was given in his honour at the Royal Dramatic Theatre on the 25th of April. On stage was more than 10 scientists together with leading dignitaries from several authorities and politicians who gave lively narratives of what is happening in the Baltic Sea. Everything from the slow geological changes over the years to the formation of new species all the way to the political situation today. 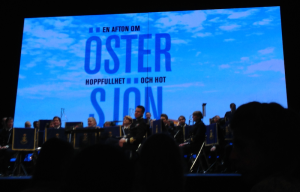 A truly dramatic moment was when Ett mycket dramatiskt ögonblick var när professor emeritus Ragnar Elmgren from Stockholm University spoke of what species can be found in the Baltic Sea today. Suddenly, a large Ascophyllum nodosum falls down from above, landing just behind him!

Professor Elmgren cooly states that this species has not managed to migrate into the Baltic Sea due to the low salinity. The common seaweed species that most people reckognise, the bladderwrack, is an important foundation species for life in the Baltic Sea. Many species find shelter or food in the bladderwrack.
This is the moment when Fucus radicans enters the stage, from the pocket of Ragnar. Fucus radicans has formed an own species from Fucus vesiculosus in less than a couple of thousand years. It is the only known endemic species in the Baltic Sea, which means it is not found anywhere else i the world seas.

Seaweed smells of the sea and is also edible. Someone who has tried Fucus radicans canapées (se tidigare inlägg) is the Swedish king, on a visit to the Askö Laboratory. 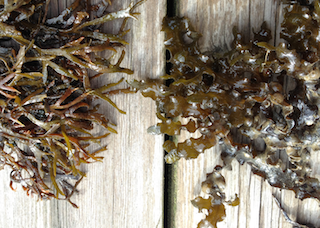 Between the presentation on stage, we the audience were entertained with beautiful music from the orchestra and songs. Amonst them an interpretation of ”Rönnerdal han dansar över Sjösala äng” (Rönnerdal is dancing over Sjösala meadow)by Evert Taubes, where the background was a lovely seagrass meadow. 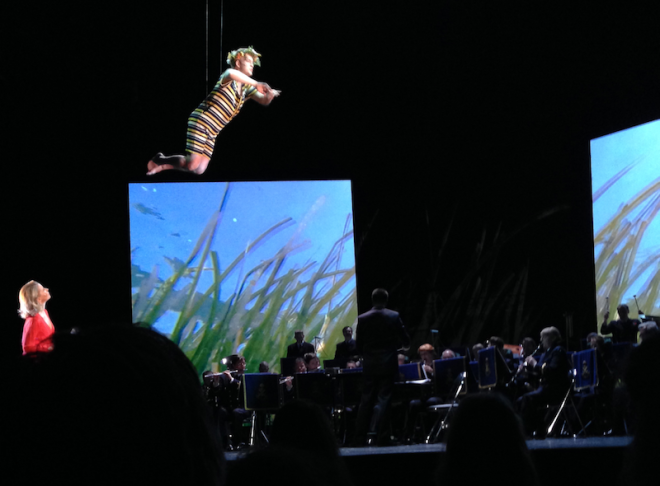 The show ended with all participants on stage and His Majesty the King expressed his thanks for a rewarding evening, emphasizing his own keen interest in environmental questions in general and those of the Baltic Sea in particular.

The number of posters was very large and one poster presented by a PhD student won the award as the best poster, selected by the board of Oikos during the conference. This was number 100 with the title: “Ant larvae as a secret weapon against social parasites” by Unni Pulliainen. During the poster session lots of engaged presentations occurred. 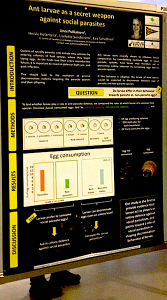 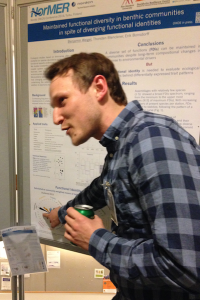 There were also a number of marine and aquatic posters, for some the author had the possibility to pitch their poster in 3 minutes.

Tiina Salo, now being on a post-doc, showed in her poster that Lymnea stagnalis responds more strongly to a heat wave after exposure to a mixture of micropollutants. But they recovered fast after the heat wave had passed. To feed the snails she used ecological salad. In the future experiments they will be fed leaves from different aquatic plant species.

Several posters presented different aspects on the hot topic “ top- down – bottom-up” regulation of different ecosystems and impact of cascading effects and interactions between species. One species that creates lots of emotions is the cormorant, when establishing large populations on small islands along the Baltic coast. 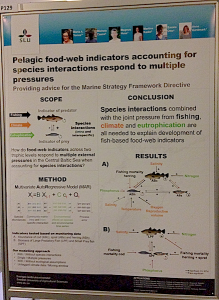 From the Department of Ecology, Environment and Evolution two posters were presented, one on the long-term effect of Pilayella on the settlement of Fucus vesiculosus by Susanne Qvarfordt and the other one presented results from a master project on the Swedish west coast about two closely related Littorina snail species behaviour when placing their egg sacs on different fucoid species.

The last poster that I want to present was of high interest dealing with the new crab species, the mud crab, Rhithropanopeus harrisii and its impact on the local fauna. It is just a question when this crab will arrive on the Swedish coast. Keep your eye out for it.

The BalticSeaWeed blog was there, of course, focusing on Fucus.

Do have a look at the lovely little film “Askö in numbers” that show areal footage of the research station.

The article compared the thallus complexity and quantified the abundance and biomass of epiphytic algae and invertebrate taxa of the two fucoid species Fucus radicans and Fucus vesiculosus from sympatric sites in the Bothnian Sea on the Swedish coast and around the Estonian island Saaremaa.

Fucus radicans had a more complex thallus structure than Fucus vesiculosus within the whole study range, but both species were more complex in the Bothnian Sea compared to Estonia. The complexity of host algae did not contribute to their associated flora and fauna taxon richness; instead, the size of thalli was a good proxy for associated communities.

You can read the article HERE for free until November 8th, courtsey of Elsevier Ltd.

At the end of Feburary, our German collegue Balsam Al Janabi attended the 15th Scientific Conference of the Section Phycology, organized by the German Botanical Society. We persuaded her to tell us about it as a Guest Blogger.

The 15th Phycology seminar took place in the beautiful marine museum of Stralsund from 23rd until the 26th of february 2014. Members from the Phycology Section of the German Botanical Society and other researchers presented a huge variety of phycology research. Organized by the University of Rostock, Prof. Dr. Ulf Karsten lead us through 59 oral presentations and 2 poster sessions, so that about 100 scientists had the change to know the research of almost all phycological disciplines and to establish contacts. English presentations were held from Bachelor-, Master-, PhD-students and Professors from Austria, Ireland, Greece, Netherlands, Mongolia as well as all over Germany, especially Kiel, Rostock, Cologne and Constance.

Phycological presentations
Eleven structured sessions, brought the audience through different principle topics with special secctions of Polar and high Alpine Phycology, the Bioacid project and a presentations in memorium to Prof. Dr. Dieter Mollenhauer (who passed away May 2013) and in honor to his contributions to his activities to promote phycology in Germany.

The antarctic research session included fascinating sessions showing the kelp system in the Antarctic seaweed system with regard to global change revealing biomass and biodiversity changes up to ecotypic differentiation. Stecher, winner of the best talk award, brought the audience below the ice of the Arctic and the DNA- and RNA of sea ice algal communities. Besides future research, also insights into the past were discovered by means of Paleolimnological studies: radiocarbon-dated sediment revealed informations about diatoms, pollen and geochemical proxies up to the Neolithic period. Analysis of biodiversity was another focus of the seminar, as for instance the diversity of the rain forest in equador. Physiological aspects, as the light regulation in diatoms explained the role of aureochromes and cryptochromes by gene silencing methods. Other approaches from terrestrial habitats revealed transcriptomic analysis as in Klebsormidium crenulatum with regard to the physiological performance under desiccation stress. Investigations about microphytes were often interesting in this seminar, as during the applied phycology session, showing the usage of algae for biogas production. The variety of disciplines was also shown by a presentation about the BIOMEX project illustrating not only the laboratory analysis of space conditions for cyanobacteria, algae and even mosses, but also the planned analysis in the international space station (ISS).

Seaweed research
The Bioacid session focused on the climate change scenaria from mesocosm experiments in the Kiel Benthocosms, a near-natural scenario analyzing a seewead community as including an experiment on the interaction of environmental stress and genetic diversity of Fucus vesiculosus. Also bacterial communities of the biofilm between the present and future scenario are compared. Fucus vesiculosus was also analyzed for their seasonality of defense as a response to the seasonal variation of micro- and macrofouling pressure. Furthermore, the gen expression under herbivore grazing was demonstrated for Fucus vesiculosus. Also other physiological aspects of brown macroalgae (Phaeophyceae) showed the iodine to salinity response in Laminaria digitata and mechanisms of photoacclimation of the giant kelp Macrocystis pyrifera revealed the relation of antioxidants with the depth at which algae appear. The role of two bacteria for morphogenesis was presented for the green algae Ulva mutabilis.

Networking and Award Ceremonies
Future network was supported by talks about the GBIF database for algae and protists as well as by insights in the SAG culture collection. During the award ceremony of best poster, Algological study and E.G. Pringsheim-Prize, the winner of the ‘Hans-Adolf von Stosch Medal’ was Prof. Dr. Michael Melkonian for his great contributions in Protistology and Phycology. He shared his experiences of decades of phycological investigations as well as appreciated cooperations.
Personally I appreciate the participation of the phycology seminar, especially due to the mixture and the connection not only of disciplines, but also of specialists and opportunities as a PhD student having the chance to discuss my methods and results with during a nice coffee brake.
//Balsam Al Janabi

Have you attended any seaweed events or do you work with seaweed and would like to tell us about it?
Feel free to contact us and become a Guest Blogger at http://www.balticseaweed.com

Finally, you can see some of the lovely underwater nature from the Baltic Sea!

As a part of the project Naturkartan,(Nature Map) a Swedish project in the East Gotha county that aims to increase access and awareness to the nature in the county, they have also posted several short films, showing nature under the surface. Have a look at The Underwater Map (Undervattenskartan)and enjoy some summer, sun and lovely waters.

It’s wonderful to take a virtual swim and enjoy the greenery at this cold and bleak time of year. We hope that more coastal counties will pick up on the trend and choose to market their blue side.

The forrest under the surface is well worth a visit

All photos and images on this blog are the property of Ellen Schagerström and/or Helena Forslund if not stated otherwise.
Baltic Sea Weed Blog
Blog at WordPress.com.