The wind was strong at Saltö, a small island on the Swedish west-coast close to the marine research station Tjärnö on January 2 when the first storm called Svea hit the shores and some of the finds were really exciting. From earlier in the year, we found a seal skeleton and a bird´s wing high up on the beach. 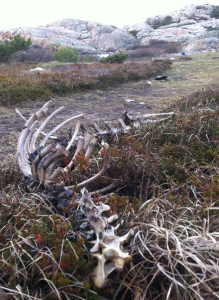 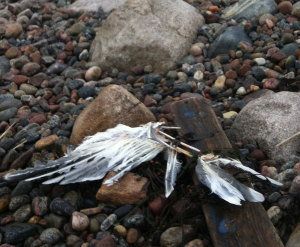 That it is a seal skeleton can be recognized by that the pelvis is low and sits far back. The head was not there anymore. There was not much left of the bird except for one of the wings. 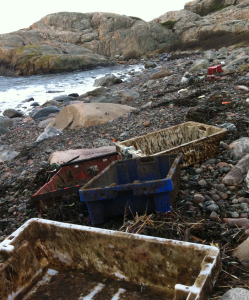 Further down was a broad zone with materials washed ashore. It included lots of plastic containers in different colours, a large shovel and various species of seaweed.

Green shovel with fouling and large knotted wrack, Ascophyllum nodosum, with giant sized receptacles on the way to develop and get mature. Another sign beyond morphology of the knotted wrack, that much of the material comes from countries other than the Swedish coast, was the long rope-like receptacles of Himentalia elongata. Both males and female thalli were found among the seaweed wrack.

The picture shows the pits on the female receptacle from which oogonia and eggs are released when ripe. On the lower male receptacle the orange spots are millions of sperms released from the conceptacle. The thalli may come from the Norwegian coast which is the closest areas where this species occurs.

I also found a blue bucket, with a some green algae on the outside and many white polychaete tubes belong to the species, Pomatoceros triqueter on the inside. Upon closer scrutiny of the inside I also found two other polychaete tubes, which was lined with small pieces of shell and sand grains. Those I have not been able to determine what species it is. 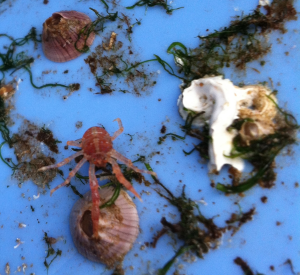 The blue bucket comes right from the English Channel, which is revealed by the tiny little pink coloured barnacles. The nearest locations of this species Balanus perforates, is just there and it is also found in the Mediterranean Sea. Together with them and a small squat lobster, Munida and a small sea urchin, they have made a long journey at sea before being washed ashore on one of the beaches in Saltö, near Tjärnö where a marine biological research station is located.

The small beach beside the pier had a lot of sand washed away. It is fortunate that the root system of plants can help to retain a portion of the sand so that it does not completely disappear. 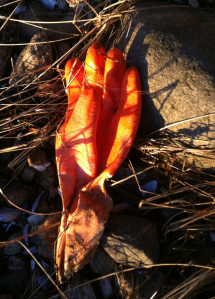 A few days earlier, it was quite cold and everything was covered with hoarfrost.
I find it strange that you only find a rubber glove and not two. So that day I found this the right glove on the beach. After the storm Svea I found the left glove on another beach, so now I have a pair.

Last night before we go home to Stockholm. A beautiful sunset at the pier at Svallhagen. All the best for the new year and hope of many new exciting discoveries and findings in 2015.

Storms are usually named in alphabetical order from the area where they begin. St. Jude was named in England but was re-named by SMHI (Swedish Meteorological and Hydrological Institute) to Simone after the name of the day in the calendar (in Sweden, each day of the year has one or two names) that the storm reached the Swedish west coast. The weather was less severe than expected at Tjärnö, but still quite strong winds and high water levels. I could still see the traces of this a month later, as we took a walk around Saltö.

The clear evidence of how high the water has reached during the last storm can be detected by looking at the size of the beach cast wrack border, and how far up on the beach it is.

This picture shows three clear rows of wrack borders where algae and eelgrass has been gathered by water movements.

During the storm Simone, a lot of algae was washed high up on shore. The material in the wrack border tells us that the entangled algae and some mussel shells were torn away from quite deep locations. Among the species of mussels that I found in the wrack border was the horse mussel (Modiolus moduolus) which looks a bit like the common blue mussel (Mytilus edulis) but is larger and lives at greater depth.

Other traces on the beach shows that part of the beach cast comes from Norway or even as faraway as from the British Isles, and has been transported all this way before ending up in this tangle of seaweed on Saltö. I found Ascophyllum nodosum, which also grows on the rocky shores around Saltö, but these specimens had much larger vesicles (floating bladders)than the ones at Saltö and were entangled together with reproductive parts of Himenthalia elongata, an algae species that is sometimes referred to as “sea spaghetti”.

Amongst our other exciting finds were several unusually large cuttlefish skeletons. It looked like they had been floating for quite some time in the sea, as they had a lot of green algae growing on them. They are often used as a source of calcium for caged birds. In days of old they were called “whale fish scales”, which is a double fault since the whale is not a fish and hence does not have scales.

There were also remnants of the summer’s fun and games. The lost bucket for catching crabs and a deflated ball. Or the almost ghostly rubber gloves in a bucket of frozen water, which looked like an art installation. 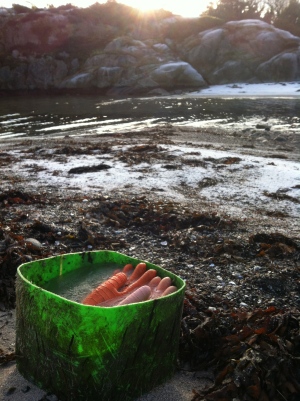 It was a cold but sunny day in November that we made all these discoveries at Saltö, which is part of the Kosterhavet marine national park near the Tjärnö Marine Laboratory. It will be exciting to come back around the New Year and see what coming storms have brought us, and if the bucket with gloves or the ball are still there. Maybe there will be some new species of seaweed from a faraway place, brought here attached to a floating shoe, a log or some other flotsam.

All photos and images on this blog are the property of Ellen Schagerström and/or Helena Forslund if not stated otherwise.