The spring is in full bloom in the sea even though there is still ice and snow covering rocks and boulders up on land. Light is returning and the algae begin to grow.

It is frightfully cold to stick the hands into the water and fetch some rocks, all covered with algae by the jetty at the Askö Laboratory. Overwintering tufts of the brown alga Pylaiella littoralis are only 4-5 cm long but have started to grow even though the water temperature is little more than + 2 or 3 °C. The name littoralis is well suited, since it is often found in the shallow zone near the shore, as littoral means shore.

The Pylaiella is about to reproduce for the first time this year, so that in  2-3 months when many of you go out to your summer-houses by the sea, large areas of the shallow hard or rocky bottoms will be covered with the next generation of  Pylaiella. The reproduction consists of lots and lots of spores being released from single-roomed sporangia, which look like beads on string in the single-cell branches. 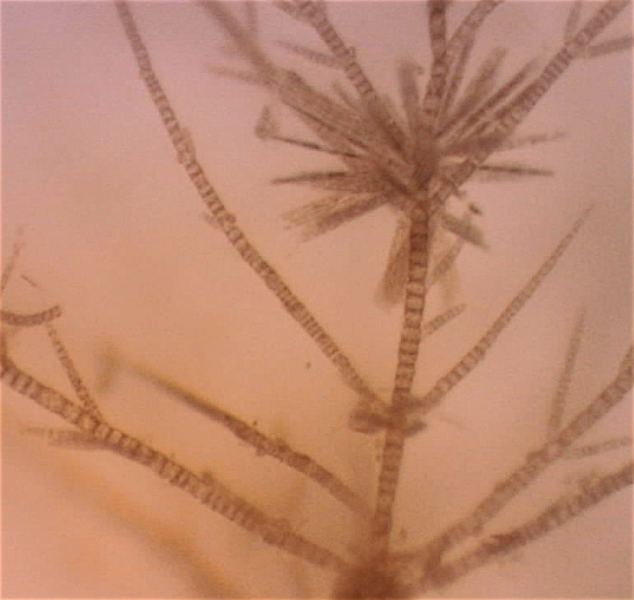 On the branches of the Pylaiella can also be seen clusters of pointy, narrow diatoms. Later in spring, there will be enormous amounts of diatoms. They are also species that thrive in colder water. On many rocks by the shore, we can also see the pretty green alga Monostroma grevillei, which is only one layer of cells thick. The species name monostroma means ”one cellular layer”.

Monostroma grevillei is a common green alga, with a narrow base and broadening leaf, which splits in the top, forming long bands. It is of a marine origin and grows on any substrate that it can attach itself to, such as rocks, shells and other large algae. It is also an early spring species, reaching about 5-10 cm in size. It reproduces during March-May. After reproduction, the new offspring lives as a microscopic stage until late winter-early spring the following year. 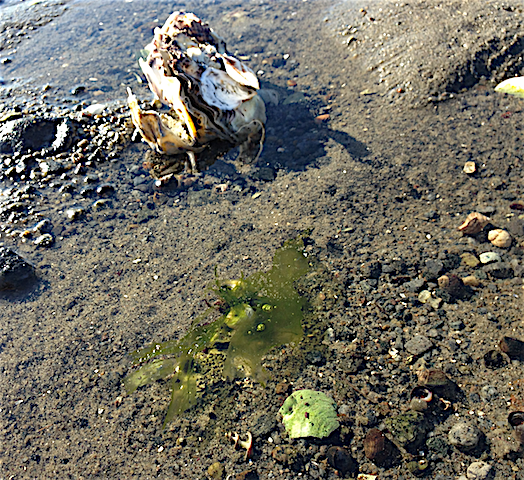 The family Monostroma is one of the most farmed green algae in Asia and is marketed as ”hirohano-hitoegusa nori”. Perhaps something for you to try as a salad, if you find some fresh green Monostroma during your walk along the shore, far away from pollution sources.