Friday 17th of May is not only the National Day of Norway to be celebrated, but also the doctoral defence of Daniel Johansson.
Daniel has studied at the Sven Loven Centre for Marine Sciences Tjärnö (more commonly known as TMBL) belonging to the University of Gothenburg.

Daniel’s thesis is entitled “Evolution of the brown algae Fucus radicans and Fucus vesiculosus in the Baltic Sea” and contains primarily work from a genetic point of view. There has been a lot of work put into obtaining the genetic identity of both species in order to distinguish Fucus radicans from Fucus vesiculosus, but also to be able to distinguish between different clones of Fucus radicans, which in the Gulf of Bothnia reproduces mostly vegetatively. This is achived by proliferation, small branches that fall off from the parent plant and then attach themselves to new substrate. 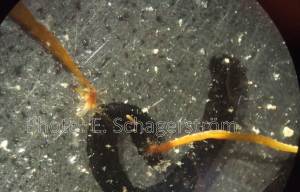 Small branches of Fucus radicans have formed rhizoids (sticky threads) that attach to the Petri dish.

Daniel has also compared the ability of proliferation between different clones of Fucus radicans to see if the dominant clone, a female that has been found along 550 km of the Swedish Coast, was better than the other clones.

The defense starts at 14:00 in the Auditorium at Tjärnö, of course we will be there to listen!

All photos and images on this blog are the property of Ellen Schagerström and/or Helena Forslund if not stated otherwise.
Loading Comments...
%d bloggers like this: